Using A Powerwall For Backup Power In A Power Cut

With solar + BSLBATT battery backup, you’ll gain major stability during a grid outage - your most necessary appliances and lights will stay on until your battery is depleted, depending on your usage.

However, if you live somewhere with long-term grid instability or frequent natural disasters, it’s important to think about a solution for full energy reliability. What if the grid is down for weeks or months?

When you add solar battery storage to your home solar system and generator, you’re setting yourself up for long-term energy independence:

A solar battery will allow you to use even more of your home solar system – you’ll store unused solar production in your home battery backup for later use. 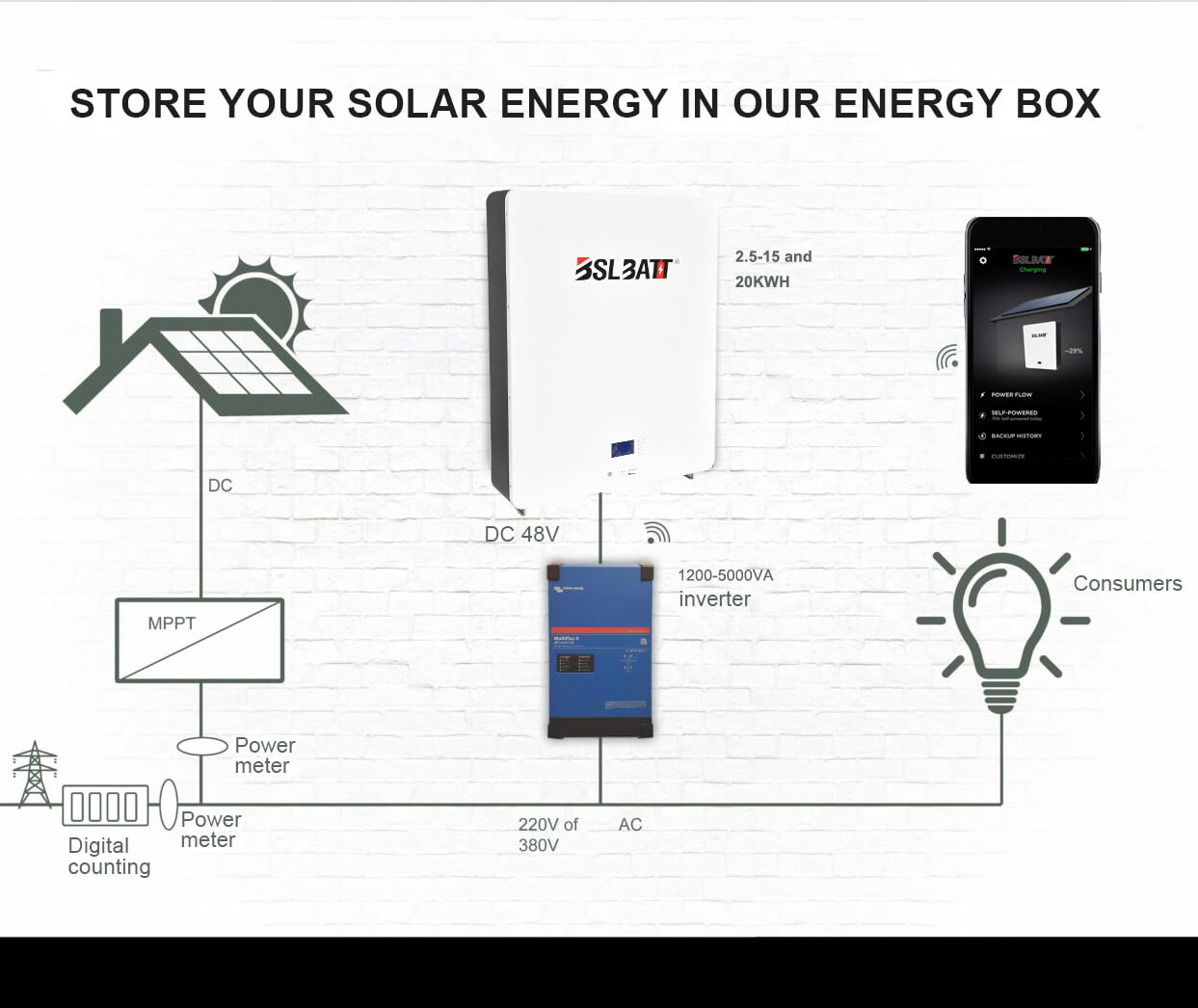 With a solar battery, you’ll use all your solar energy before burning fuel in your generator – this is especially important when there may be long-term grid instability and a fuel shortage, like after a natural disaster.

The modern technology--wall-mouted battery so called “powerwall”, can always be a reliable backup for your home energy. Normally, they work everyday follows the pattern below:

* Powerwall for Backup Power Under the Normal Pattern

-- As the sun rises, the panels begin to produce energy, though not enough to meet morning energy needs. Powerwall batteries can fill in the blanks with energy stored the day before.

-- During the day, the energy produced by solar panels peaks. But usually with no one at home on weekdays, energy consumption is very low, so most of the energy generated is stored in batteries.

-- While at night with the highest daily energy consumption, the solar panels produce little or no energy. The battery will use the energy generated during the day to meet its energy needs.

From the above usage scenario, we can easily realize that during the day our LiFePO4 powerwall batteries can optimize the usage of your solar power in your house. BSLBATT battery ensures that the sun’s energy is directly applied to meet your home electric power needs when the sun raises in the morning. In addition, if solar energy is available but does not need to provide electricity for homes, our batteries automatically switch over to provide electricity for other electricity consumers. These consumers can be heating systems or washing machines and dishwashers. 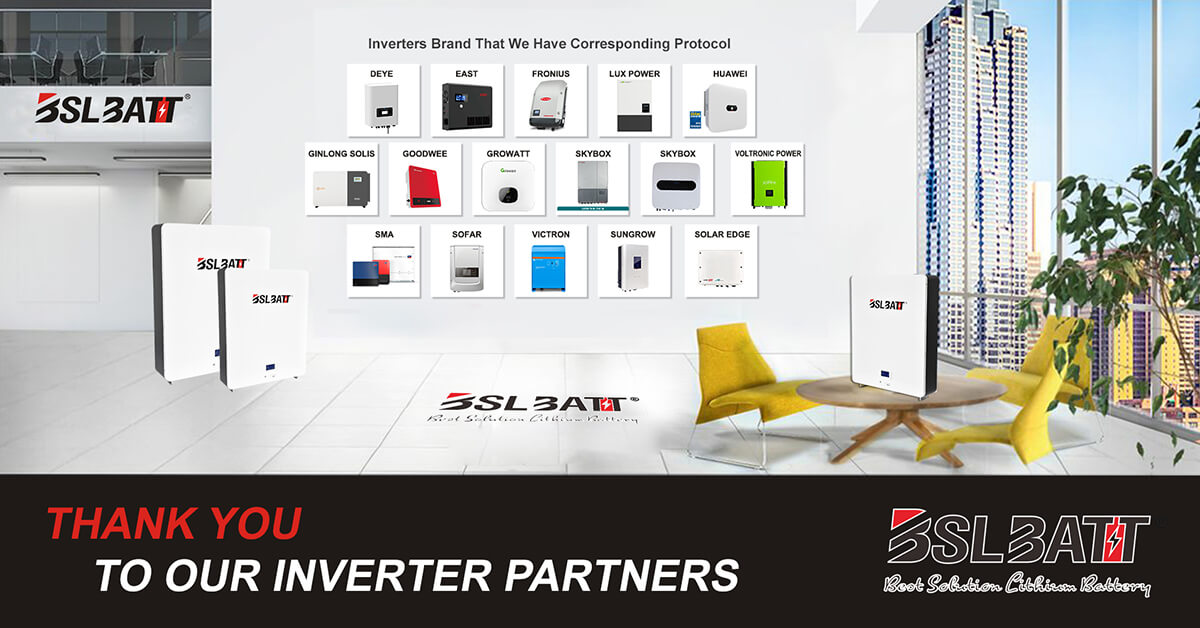 So what if our powerwall batteries work as a backup power when some emergency occurs?

* Powerwall for Backup Power Under the Sudden Blackouts

You must have experiencing some sudden blackouts through your life. With BSLBATT powerwall batteries, you can say goodbye to this type of sudden fright. They can function well as a reliable source of backup energy for your home in case of a power failure. Our battery supplies your family with strong and enough electricity even when the grid is down.

For example, in the midst of hurricane season, power outages always occurring with regular frequency throughout North Carolina. If you’re one of whom live in this area, you might have been upset by this situation for years. With BSLBATT powerwall as backup power, these batteries can perform well during outages, compared to backup generators, users can not only best use its power but also say good bye to the noise from the functioning electric generator.

You can even say it’s the best part was that you can enjoy the silent reliable power yet it was not from a noisy generator. In the meanwile your neighbor’s generator will be going all day and night.

How long will my battery system last?

Some batteries will also provide longer backup than others. The 15Kwh home backup battery of BSLBATT, for instance, outranks Sunrun’s Brightbox at 10 kilowatt-hours. But those systems have the same power rating, at 5 kilowatts, which means they offer the same “maximum load coverage,” according to WoodMac’s director of solar, Ravi Manghani.

“Typically, during a power outage, one wouldn't aim to draw at the maximum 5 kilowatts," a load roughly equivalent to running a clothes dryer, microwave and hair dryer all at once, Manghani said.

“An average homeowner typically will draw 2 kilowatts maximum during an outage, and an average of 750 to 1,000 watts during the course of the outage," he said. "This means a Brightbox will last for 10 to 12 hours, while a Powerwall will last for 12 to 15 hours.”

Certain applications and programs already on the market, such as Sense and Powerley, can also give homeowners an idea of their usage. But in a Catch-22, the apps might require power to function, though data on past power usage could help homeowners identify which appliances to prioritize.

Recent data suggests that many homeowners installing energy storage systems are opting for two batteries instead of one for greater backup capacity.

John Berger, CEO at residential solar and storage company Sunnova, told Greentech Media that the company has seen an influx in demand for storage from existing customers looking to update their systems, as well as new customers asking for batteries from the start. In terms of how long the system can last, however, Berger offers what he called “a rather unsatisfying answer.”

“It depends on how much power your home uses, how big it is, what the weather is in your particular area,” he said. “Some of our customers may be able to have a whole home backup with one or two batteries, and then in other cases that may still not be enough.”

SO IS IT WORTH IT?

So although power cuts are rare, they are disruptive when they do occur. Furthermore, some areas, especially rural locations, are more prone to power cuts than others.

You’ll need to balance the extra cost of a back-up battery system against the benefits of riding through the power cut.

It’s not just back-up power – here’s our guide to how a Is the BSLBATT Powerwall system worth it?

Check out some of our BSLBATT Lithium battery storage projects