This week we had the opportunity to learn more about what is a solar battery or a battery to store solar energy. Today we want to dedicate this space to know a little more in depth what types of solar batteries exist and what are the variables.

Although today there are many ways to store energy, one of the most common is through a lead-acid battery also called lead-acid battery, very common in conventional and electric vehicles. There are also other types of batteries such as lithium ion (Li-Ion) of larger sizes that can replace lead in renewable energy systems. These batteries use a lithium salt that helps the electrochemical reaction by facilitating the current to flow out of the battery.

What Types of Batteries for Solar Energy Storage?

There are different types of solar batteries in the market. Let's look a bit about lead-acid batteries for renewable energy applications: 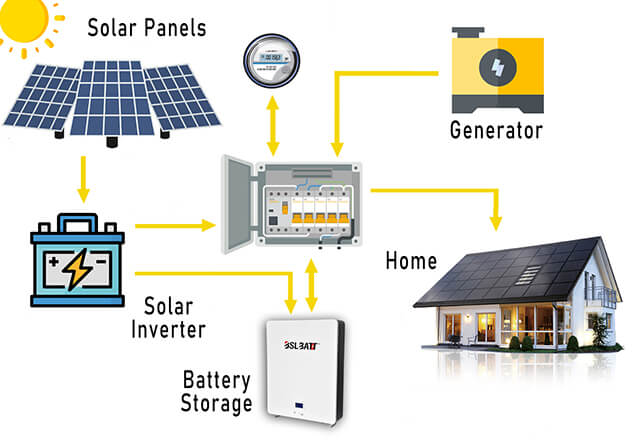 This type of battery has a greater storage capacity. While this technology is nothing new, they are now gaining a small foothold in the large-scale and residential battery market. They are called flux batteries or liquid batteries because they have a Zinc-Bromide water-based solution that slides inside, and they work at high temperatures so that electrolyte and electrodes remain in a liquid state, about 500 degrees Celsius are necessary to propitiate this situation. At the moment, only a few companies are producing flow batteries for the residential market. In addition to being very economical, they present fewer problems when overloaded and have greater durability.

The VRLA-Valve Regulated Lead Acid battery - in Spanish acid-regulated valve-lead is another type of rechargeable lead-acid battery. They are not completely sealed but contain a technology that recombines the oxygen and hydrogen that leaves the plates during loading and thus eliminates the loss of water if they are not overloaded, they are also the only ones that can be transported by plane.

You are in turn divided into:

Gel Batteries: as the name implies, the acid it contains is in the form of a gel, which prevents liquid from being lost. Other advantages of this type of battery are; They work in any position, corrosion is reduced, they are resistant to low temperatures and their service life is longer than in liquid batteries. Among some of the disadvantages of this type of battery is that they are very delicate to charge and its high price.

In English-Absorbed Glass Mat- in Spanish Absorbent Glass Separator, they have a fiberglass mesh between the battery plates, which serves to contain the electrolyte. This type of battery is very resistant to low temperatures, its efficiency is 95%, it can work at high current and in general, it has a good cost-to-life ratio.

In solar and wind systems the batteries have to give energy over a relatively long time and are often discharged at lower levels. These deep cycle type batteries have thick lead layers that also provide the advantage of significantly prolonging their life. These batteries are relatively large and heavy by lead. They are composed of 2-volt cells that come together in series to achieve batteries of 6, 12 or more volts.

Bland and definitely ugly. But it's also reliable, proven, and tested. Lead-acid batteries are the most classic and have been on the market for decades. But now they are being quickly overtaken by other technologies with longer warranties, lower prices as solar battery storage become more popular.

From a commercial point of view, the battery uses in its composition abundant raw material (nickel, iron, aluminum oxide, and sodium chloride – table salt), which is relatively low cost and chemically safe. In other words, these batteries have the greatest potential to displace Lithium-Ion batteries in the future. However, they are still in the experimental phase. Here in China, there is work done by the BSLBATT POWER which aims to develop the technology for stationary use (uninterrupted energy, wind, photovoltaic, and telecommunications systems), as well as vehicular applications.

It is necessary to differentiate between batteries for cyclic use (daily charge and discharge) and batteries for use in uninterruptible power supplies (UPS). These only come into effect when there is a power failure, but they are usually full. 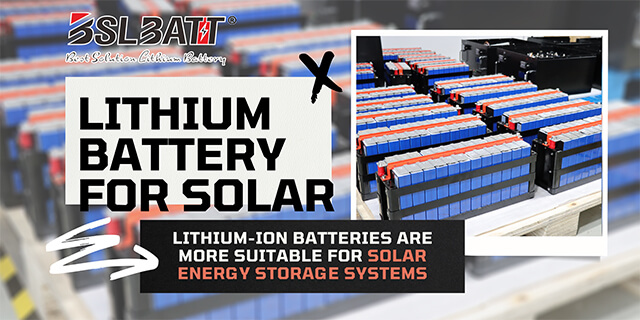 What is The Best Solar Energy Storage Battery?

The three types of batteries have different costs, such as lead-acid and nickel-cadmium batteries, which are more expensive in relation to their useful life, and lithium-ion batteries, which have greater durability and storage capacity, ideal for on-grid systems and off-grid systems. So, let's choose the best battery for your solar energy system?

Being the most used in photovoltaic systems, the lead-acid battery consists of two electrodes, one of spongy lead and the other of powdered lead dioxide. However, even though they operate in solar energy storage, their high cost does not match their useful life.

Being rechargeable several times, the nickel-cadmium battery also has a very high value when evaluating its useful life. However, it is still widely used for the operation of devices such as cell phones and camcorders, although it fulfills its role of storing photovoltaic energy in the same way.

More powerful and with high durability, the lithium-ion battery is a viable option for how to store solar energy. It operates reactively with a large amount of energy in increasingly smaller and lighter batteries, and you don't have to wait for it to fully discharge to recharge, as it doesn't have the so-called “battery addiction”.

What does the life of a solar battery depend on?

Apart from the type of solar panel battery, there are also other factors such as manufacturing quality and correct use during operation. To ensure a long life of a battery, a good charge is necessary, to have sufficient capacity of solar panels so that the charge is complete, a good temperature in the place where it is installed (at a higher temperature the life of a battery is shorter).

If you are wondering what battery you need for a domestic installation, without a doubt the battery that was launched during the course of 2016 is the one indicated. BSLBATT Powerwall, created by the company Wisdom Power, operates 100% based on solar energy and is designed for home use. The battery is lithium-ion, is equipped with photovoltaic panels completely independent of traditional energy systems, is fixed on the wall of homes and will have a storage capacity of 7 to 15 Kwh that can be scaled. Although its price is still very high, approximately USD 700 and USD 1000, surely with the constant evolution of the market will be increasingly easy to access.