Whether for economic, technical or political regulatory reasons, home backup batteriesassociated with photovoltaic systems are growing all over the world.

Previously limited to off-grid systems, Li-ion battery packs are now an important addition to grid-connected or hybrid PV systems and can be connected to the grid (grid-connected) or operated as a back-up power system (off-grid).

Many lithium battery manufacturers on the market have been working on equipment and solutions for AC-coupled home backup battery systems, including inverters and solar lithium battery packs with BMS (battery management systems).

This is a solar cell knowledge supplement: What is an AC-coupled battery system?

In centralised power generation, so-called BESS (Battery Energy Storage Systems) are already used, which regulate the intermittency of energy generation and help to control the stability of the power system or reduce the LCOE (Levelised Cost of Energy) of photovoltaic and wind power plants.

At the micro or mini-generation level, AC-coupled battery systems can perform a variety of functions.

● Providing better energy management in the home, avoiding the injection of energy into the grid and giving priority to self-generation.

● Providing security for commercial installations through backup functions or by reducing demand during peak consumption periods.

● Among other possible functions.

Due to the economic, technical or political regulatory aspects mentioned at the beginning or the urgent need to reduce electricity bills in homes themselves, grid-connected PV systems are becoming the new way of life, preferred by the majority of householders, and we are now living in an era where home storage battery systems are showing their potential.

AC-coupled back up batteries for house will also become the standard for homes worldwide in the coming years, and this is already becoming common in some countries, such as Australia and the USA.

AC coupled back up battery systems for house can benefit consumers by reducing their electricity bills (by storing energy for consumption at peak times) or by avoiding injecting energy into grid injections if the benefits of a distributed generation credit compensation system are reduced (by charging a fee).

In other words, back up battery for house would make possible the long awaited energy independence of consumers without the constraints or restrictions imposed by electricity industry companies or regulators. 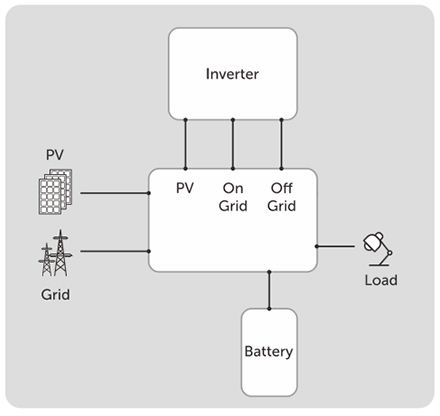 Basically, two types of AC-coupled battery systems can be found on the market: multi-port inverters with an energy input (e.g. solar PV) and back up battery for home; or systems that integrate components in a modular way, as shown in the diagram below.

Usually one or two multi-port inverters are sufficient in homes and small systems. In more demanding or larger systems, the modular solution offered by device integration allows greater flexibility and freedom in sizing the components.

In the diagram above, the AC-coupled system consists of a PV CC/AC inverter (which can have both grid-connected and off-grid outputs, as shown in the example), a battery system (with DC/AC inverter and built-in BMS system) and an integrated panel which creates the connection between the device, the backup battery for home and the consumer load.

The BSLBATT Solar Power solution, which we describe in this document, allows all components to be integrated in a simple and elegant way. The basic house back up battery consists of a vertical structure that brings together these 2 components: the grid-connected solar inverter (top), and the 48V lithium battery pack (bottom).

With the extension function, two vertical columns can be added vertically, allowing the number of inverters and battery packs to be extended left and right depending on the needs of each project.

Inverters of the 5.5kWh series, with a power range of 4.8 kW to 6.6 kW, three-phase, with grid-connected and off-grid operation modes.