Is a home battery worth the investment?

Storing surplus electricity produced by your photovoltaic panels for later use is an idea worth studying.

● When you are not there and the sun is shining, your panels produce 'free' electricity that you do not use because it goes back to the grid.

● Conversely, in the evening, when the sun is down, you pay to draw electricity from the grid.

Installing an electric battery can allow you to take advantage of this lost energy. However, it involves a degree of investment and technical constraints.

On the other hand, you may be entitled to certain compensations. Furthermore, you should also take into account future developments such as vehicle-to-grid.

Advantages of a home battery

In terms of the supply chain, you can hardly do better than producing your own electricity.

However, you need to know that your home battery will not allow you to get through the whole winter on your own reserves. With a battery, you will consume on average 60% to 80% of your own electricity, compared to 50% without (according to Brugel, the regulatory authority for the Brussels' gas and electricity market).

With a home battery, you can optimize your electricity needs and purchases. As a producer:

● you store self-produced electricity – which is therefore free – to use it later;

● you avoid 'selling' electricity at low prices and then having to buy it back later at the full rate.

● you avoid paying a fee for energy fed back to the grid (does not apply to people living in Brussels);

Even without panels, some manufacturers, such as Tesla, maintain that you can buy electricity from the grid when it is cheapest (dual hourly rate for example) and use it later. However, this requires the use of smart meters as well as a smart load balancing.

3. For the electricity grid

Consuming locally generated electricity rather than feeding it back into the grid can help manage the balance.

In the future,  some experts even think domestic batteries could play a  buffer role on the smart grid by absorbing renewable production.

4. To ensure a secure supply for you

In the event of a power failure, the home battery can be used as backup power. Be careful, though. This use has technical constraints, such as the installation of a specific inverter (see below). 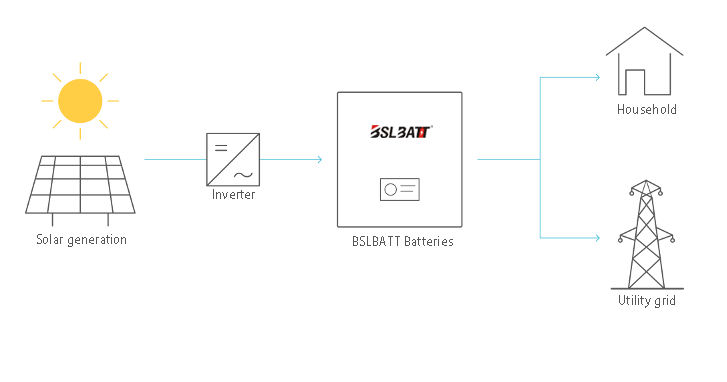 Do you have a backward running meter?

If your power meter runs backward or when the so-called compensation model is applied (which is the case in Brussels), a home battery may not be such a good idea. In both cases, the distribution network serves as an immense electric battery.

This compensation model is likely to come to an end within a foreseeable time. Only then, buying a home battery will be worth the investment.

To consider before investing

Currently about € 600/kWh. This price may fall in the future... thanks to the development of the electric car. In fact, batteries whose capacities fall to 80% could be reused in our homes. According to the Blackrock Investment Institute, the price per kWh of batteries should fall to € 420/kWh in 2025.

10 years. Current batteries can support at least 5,000 charge cycles, or even more.

Domestic batteries can weigh more than 120 kg. They can, however, be installed in a service room or discreetly hung on the wall because their design makes them quite flat (about 15 cm against about 1 m high).

Before investing in a home battery, check that it has a built-in inverter, suitable for the use you want to make of it. If it does not, you will need to buy and install an inverter in addition to your battery.

In fact, the inverter from your photovoltaic installation is one-way: it transforms the direct current from the panels into alternating current usable for your devices. However, a home battery needs a two-way inverter, as it both charges and discharges.

But if you want to use the battery as a back-up power supply in the event of a power failure on the grid, you will need a grid-forming inverter.

What is inside a home battery?

● a lithium-ion or lithium-polymer storage battery;

● an electronic control system which makes its operation fully automatic;

In the future, domestic batteries will probably also play a buffer role on the smart grid by regulating renewable energy flows,

What's more, electric car batteries, which remain unused during the day in car parks, could also be used. This is called vehicle-to-grid.

Electric cars could also be used to power the home during the evening, recharging at night at low prices, etc.

All this, of course, requires technical and financial management at all times which only a fully automatic system can provide.